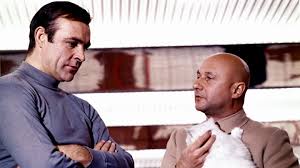 Oh, Bond.  Only you could get away with “transforming” yourself into a Japanese man for a mission, or instantly moving on to the next love interest days (maybe hours, I forget) after your previous one was murdered. Bond, as written, in most of the ’60s films isn’t a very complex character. He’s pure male fantasy. Sean Connery is so great, though, so charismatic, so cool, that I forgive myself for cheering him on despite all of his nonsense. In this outing, which I struggled to follow but was never bored, Bond hurdles towards his archenemy, Blofeld (Pleasance), pulling strings from the shadows, in some kind of space-related take over the world plot. Bond navigates Japan’s back alleys and evades SPECTRE’s attempts on his life. I loved the locations and the title song, Pleasance as Blofeld and the trio of Bond girls. I was less impressed by the plot written by Roald Dahl, which is obscured even by Bond standards.