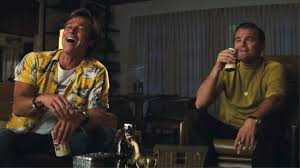 I love actors and clearly, Tarantino does as well. Every actor’s career has a unique arc to it because, regardless of how talented an actor is, there is only so much they can control. As a result, every actor struggles at some point in their career. Rick Dalton (DiCaprio), one-time star of T.V’s Bounty Law and the main character in Tarantino’s latest film, is struggling. His show is over, his attempt to make it into film didn’t pan out. Now, the only roles he gets are heavies in someone else’s T.V show, and the only movie roles offered are, in his mind, second-rate spaghetti westerns. Once Upon a Time in Hollywood moves slowly through a handful of crucial days in the lives of Rick Dalton, his best friend/stunt double, Cliff Booth (Pitt), and his famous, relatively new neighbor, Sharon Tate (Robbie) as we move to the fateful date of August 8th, 1969 (Tate-LaBianca murders) knowing very well what happened in real life and wondering what Tarantino is going to do with it. Once Upon a Time in Hollywood is a strangely languid picture. I consider it a triumph for a director such as Tarantino to be able to still surprise me on his 9th feature film. The friendship between Dalton and Booth is a memorable one, and both actors are endearing here; DiCaprio is surprisingly moving as the insecure Dalton and Pitt as cool as he has ever been and that is saying something. I was underwhelmed and largely indifferent to Robbie’s Sharon Tate, though I like Tarantino’s historically inaccurate ending. I don’t object to Tate being a supporting character or having so few lines but she never made much of an impression on me and maybe I am handicapped by having no knowledge of her aside from her tragic murder. The 1960s are a foreign time and hold no nostalgia for me. Unavoidably, ’60s rock isn’t really my thing so this is probably my least favorite Tarantino soundtrack.

2 thoughts on “Once Upon a Time in Hollywood (2019, Directed by Quentin Tarantino) English 8”