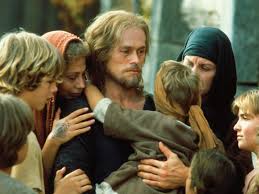 Playing devil’s advocate, Martin Scorsese’s The Last Temptation of Christ, upon release, was widely accused of blasphemy. His film depicts Christ (Dafoe) sitting in brothels, watching with anguish as Mary Magdelene services customers, Christ coaxing Judas (his most devoted disciple) into betraying him, and, most saliently, Christ in a state of doubt. This doubt eventually weaves its way into a dream sequence that became one of the most controversial moments in film history. Stranded on the cross, Christ fantasizes about a life lived fully, married to Mary of Bethany, with a litter of children, and seeing himself in old age. Made to be provocative, the question is then (since this is a Scorsese film and not Bunuel who was a gleeful provocateur), is any of it substantial, or moving? For me, not so much. It resembles the message of some street corner disciple handing out pamphlets with some alternative theological ideas (in Korea, where I live at the moment, you get a ton of people preaching “God the Mother”). These conversations, like this movie, are interesting, odd, but most of all, uncomfortable. Can there be value in a film that’s so deeply unsettling? Certainly. But it means that entertainment value is null and void-at 166 minutes, The Last Temptation of Christ is a bit of a slog-and what’s left better be worth the toil. There’s plenty to admire in this film. Dafoe, being miles away from your traditional portrayal, is fiercely moving. Rather than Christ, the austere figure, robed in white, Dafoe’s Christ is enigmatic, passionate, and not afraid to get his hands dirty. And obviously, Scorsese is a master craftsman. In the end, though, I wasn’t willing to go out on the ledge that this film exists on. Its questions are wild and self-defeating, and I’m pretty disenchanted by all-white casts in Biblical pictures at this point.