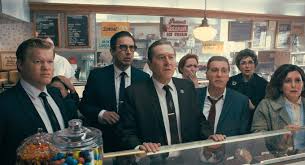 Despite the unsettling, far-from convincing “deaging technology” used to make its trio of legendary stars-De Niro, Pesci, Pacino-appear younger at different stages of the story, despite what some immature Marvel fan throwing a temper tantrum might say, The Irishman is a great film. Relating labor union official, Frank Sheeran’s account of his time spent working under the Buffalino crime family, his friendship with Jimmy Hoffa, and ultimately, Hoffa’s murder, The Irishman is a 3 1/2 hour look at the intricacies of gangster life and how it merged with politics over the decades. It’s fascinating. Scorsese has always been masterful with the details. The performances are excellent, aside from the problematic age effects (even if the effects were seamless, De Niro still moves and sounds like an old man). De Niro as Sheeran and Pesci as Russell Buffalino are understated, compelling, while Pacino is hilarious as the bombastic Hoffa. His last scene where he looks at his friend and makes the unwise decision to trust him is so poignant. One absurd complaint that I’ve heard is that Anna Paquin, playing Sheeran’s daughter, only has six lines. Sheeran is estranged from his daughters. The impression Paquin leaves as Peggy is one of hard silence.  I thought that spoke volumes. If Casino and Goodfellas showed the appeal and glamour of the underworld life, The Irishman shows the pettiness. “Microaggressions” is a serious concept these days. The Irishman is full of microaggressions. I picture gangsters as these tough guys, but The Irishman shows its criminals being passive-aggressive. Arguing over someone wearing swim trunks to a meeting, for example, in my favorite scene of the year.