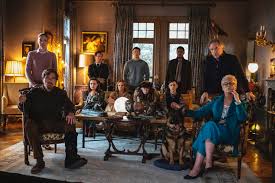 You can’t help but try to get ahead of complex mystery plots like this one. You believe that you are clever and that you’ve seen or read every twist. You’re skeptical that any new mystery can surprise you. At the same time, you are hoping that it does. The murder mystery is a genre that will never die out. It’s a never-ending well. A corpse with a hidden culprit has always been and will always be immediately engaging. If someone is killed, people want to know who did it, and so, without complaint or regret, and I’m sure that I’m not alone, I have sat through dozens of mediocre whodunnits and read just as many. Writer-director, Rian Johnson (fresh off of Star Wars: The Last Jedi), has too, and with an apparent love of the conventions of the genre, as well as a knowledge of some of its faults, he’s crafted Knives Out. The result is worthy and exciting, but not quite a knockout. Very few murder-mysteries are.

Starring Daniel Craig as a private detective, Benoit Blanc, hired to investigate the seemingly open and shut suicide of wealthy mystery writer, Harlan Thrombey (Plummer), we meet the large cast of characters made up primarily of Thrombey’s relatives: his daughter, Linda (Lee Curtis), her husband, Richard (Johnson), his widowed daughter-in-law, Joni (Colette), her daughter, Meg (Langford), and his youngest son, Walt (Shannon), with his wife and son. The more characters, the better in murder mysteries, because that means more suspects. We also meet Marta (de Armas), kind and honest, who would seem out of place in a murder mystery. She was Harlan’s nurse and, being unable to lie, becomes Blanc’s ally during the investigation. It’s the character of Marta, and she’s ultimately the main character, who first signifies the slight veering off familiar course that Knives Out takes. She’s right in the center of the action, but we’re told from the start to trust her, to see things from her perspective (not the detective’s), and to have a rooting interest in her. Generally, in whodunnits, my rooting interest is devoted entirely to solving the case. We care what happens to her. We notice when Richard hands her a plate at a party as if she’s the help.

Depth of character isn’t really an option in these kinds of movies. Instead, you’re working with caricatures. Rather than a weakness, I consider that part of the fun. I was aware of Ana de Armas before Knives Out and thought she was quite good in films like Knock Knock and Blade Runner 2049. The problem was that I didn’t like those movies. She makes a real impression on me here. Together with Daniel Craig’s eloquent, thoughtful country detective, the two make an appealing odd couple and are perhaps the movie’s chief pleasure. As for the supporting cast, one of the steady attractions of murder mysteries is the possibility of assembling a large number of famous people. There are a great many roles to be filled in movies like this and Hollywood traditionally fills them with A-List actors. Knives Out goes more for a strong cast of character actors and they do memorable work.

How do you revitalize the whodunnit? The central tropes are firmly established-a roomful of suspects, an isolated location, a brilliant detective, and a finale wherein that detective breaks it all down for us and the characters. Knives Out doesn’t remove any of the clichés. Instead, it plays with plot structure, and, more significantly, demonstrates a level of self-awareness missing from your average, straightforward murder mystery. That said, I wasn’t shocked by the twists. Not nearly. Its solutions are logical and maybe a tad simple. I think I might have enjoyed a red herring or two thrown in at the film’s climax, but I was satisfied.