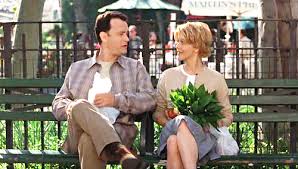 Joe Fox (Hanks) is a mega-rich businessman who owns a chain of bookstores. Kathleen Kelly (Ryan) runs a quaint children’s book store in Manhattan, one she took over after her mother died. When Joe opens a Fox Books just blocks away from Kathleen’s store, the two become rivals, while unknowingly falling in love with each other through online correspondence. A remake of Ernst Lubitsch’s classic The Shop Around the Corner, itself based on a play, You’ve Got Mail is a lot of things: corny, contrived, charming, and romantic most of all. It can be called inferior to The Shop Around the Corner, which it is, and still be a fantastic romantic comedy, which I believe it is, despite the soundtrack being more distracting than an asset unlike the soundtracks of some of Ephron’s previous films, notably Sleepless in Seattle. Clearly inspired by Pride and Prejudice (the book is referenced a couple of times in the movie), Joe is a bit of an arrogant jerk at times before sweeping Kathleen off of her feet in the end. Through it all, Tom Hanks and Meg Ryan shine.