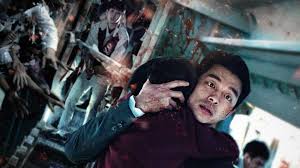 Trains have been prime real estate for a number of intriguing film premises. With the popularity of zombies, it was only a matter of time before we’d get zombies on trains. Train to Busan stars Gong Yoo as a selfish, neglectful father taking his kind daughter (Su-an) from Seoul to Busan (where her mother lives) aboard the KTX. On the way, an outbreak infects some of the passengers who turn into lobotomized, flesh-eating zombies, making the trip a survival of the fittest free-for-all, with a handful of uninfected working together. Trains are excellent set-pieces because they bring together a variety of people, making for diverse characters, and most importantly, they isolate the characters from the rest of the world. If characters can just leave a situation, it’s not as compelling. If you have ten or so passengers stuck inside of a moving train with a few dozen zombies, that’s compelling. Aside from its neat premise, Train to Busan gets a lot of mileage out of its father-daughter relationship, though the workaholic dad is a bit hackneyed at this point and the ending gets too sentimental for my liking. I also felt the horror element is rather tame for my taste but Train to Busan is more of an adrenaline rush than a horror film, and as such, it’s very good.