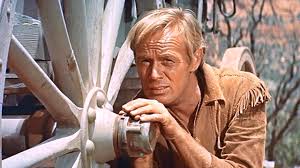 A fugitive, Comanche Todd (Widmark), is caught by a sadistic Sheriff and dragged along with a wagon train of civilians to some town where he’ll be hanged. Comanche Todd, a white man raised by Indians, is given some sympathy by a few of the travelers but feared by most. When the wagon train is attacked by vengeful Apache, Comanche Todd is called on to lead the few survivors to civilization. This is a classic old Hollywood western in a number of ways but manages some moral ambiguity which is rare for westerns of the period. It also depicts Indians as something more than mindless killing machines, which is rarer still. Although a bit hokey at times, all in all, it’s a rousing adventure filmed beautifully in Cinescope by director Delmer Daves who filmed many excellent westerns.