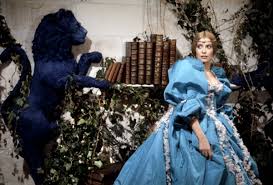 Donkey Skin, as adapted by Jacques Demy, is a genuinely bizarre fairy tale. Based on a story by Charles Perrault (who also wrote Little Red Riding Hood, Cinderella, and Sleeping Beauty), I was unfamiliar with this one. A king (Marais) loses his wife (Deneuve) but promises just before her death to only remarry if the girl is more beautiful than her. Finding no one that qualifies for so long, the king eventually notices his daughter, the Princess (also Deneuve), has blossomed into the most beautiful girl in all the kingdom. Determined to produce a male heir, he demands his daughter’s hand in marriage. She responds by consulting a kind but mischievous witch, The Lilac Fairy (Seyrig), who has her wear the carcass of a magical donkey in order to escape a life as her father’s bride. Yes, it’s a strange tale told with relish. It’s a beautiful film to look at with Deneuve at its center in the most spectacular dresses, and like Demy’s other musicals, the soundtrack is lovely. There’s horror, beauty, humor, romance, fantastic creatures, lessons to be learned, songs to be sung. All expressed with Jacques Demy’s abundant imagination and a profusion of style, though, unlike some of Perrault’s other stories, Donkey Skin seems to lack any true depth.