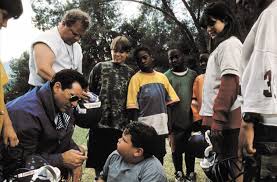 The younger, Danny O’Shea (Moranis), has always been in the shadow of his Heisman trophy-winning brother, Kevin (O’Neil). When Kevin starts up a local Peewee football team but cuts Danny’s daughter simply because she’s a girl, Danny decides to start his own team. Since each town can only have one, the two brothers will face off to determine which team stays. I do try not to grade on the curve. At the same time, you can’t watch something like Little Giants with the same criteria used for The Godfather. The fact is Little Giants was made to please children first and foremost and is pretty successful on that front. Beyond that, it’s a fast-paced, goofy, creative effort with a solid premise and a handful of strong characters. Even its sillier moments (the annex of Puerto Rico and numerous gags) are pretty memorable, as are the nicknames “Icebox” and “Spike.” Fun for a kid, reasonably amusing for an adult.