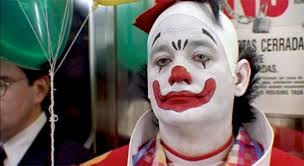 The fact that Bill Murray has only directed one film suggested to me that it must not be very good. I was pleasantly surprised to find that this is not the case. His lone directorial effort, Quick Change, is modest but effective, clever, funny, and best of all, a showcase for an exceptional cast from the top down. Murray, himself, stars as Grimm, a New Yorker who’s had enough. So he walks into a bank and holds it up, Dog Day Afternoon style, before walking out scot-free with a million dollars thanks to his well-executed plan. The problems don’t really start until afterwards when he attempts to flee the country. He gets Police Chief Walt Rotzinger (Robards) after him and every possible situation New York can throw at him slowing him down.