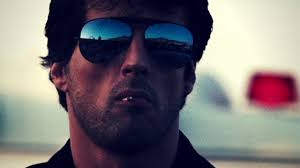 Marion Cobretti, a.k.a “Cobra” (Stallone) is a one-man army. Part of the LAPD’s “zombie squad,” he only gets called into the cases deemed to difficult for ordinary measures. His latest case is a whopper. Someone known as The Night Slasher is killing off citizens at an alarming rate and after an attractive model named Ingrid witnesses an attack and confirms Cobra’s theory that The Night Slasher is a gang and not one man, Cobra must do all he can to keep her alive. This is a simple-minded, action-packed ride and one of a number of films that I really disagree with the critical consensus. What are you expecting from Cobra? Literate dialogue, dramatic heft, plot complexity? If so, don’t bother here. You’re wasting your time. Cobra is pure action, cool, macho Stallone with those glasses and the matchstick dangling from his mouth. The villains are evil, ineloquent, and need to die. Guess who’s going to kill them: Cobra.