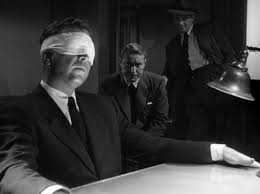 Raymond Chandler’s immortal character, Phillip Marlowe, gets his big-screen debut in this adaptation of Farewell, My Lovely. Marlowe’s played by song and dance man, Dick Powell, who wanted to expand into dramatic fare and did so successfully, thanks to a strong performance here. Two cases collide for Marlowe as he searches for missing gems that were stolen during a payoff he was paid to monitor. This leads him to the wealthy but dysfunctional Grayle family, a sinister “psychic healer,” and a mentally unstable brute named Moose (Mazurki). Murder, My Sweet is an excellent adaptation and an early example of film noir. It has all of the wonderful conventions of the private detective subgenre: femme fatales (in this case two), a small-time case that unravels into a big one, thugs, murder, mystery. I love this stuff. It’s impressive to me the degree of complexity it accomplishes with such few characters and an economy of runtime.