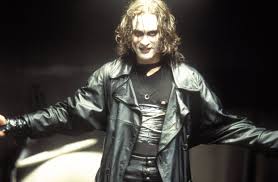 Good versus evil atop an old cathedral, sword fighting in the rain. This is my favorite image in The Crow, a cult-classic full of striking imagery and exciting moments. Brandon Lee’s last film, tragically, stars the late actor as Eric Draven, a rock musician with a great girlfriend in a bad city. Eric is killed one night, just after watching his girlfriend raped and murdered, but he returns a year later as a vengeful spirit out to kill each member of the gang that did it. This leads all the way to the top of the criminal world or, in this case, Top Dollar (played memorably by Michael Wincott). There’s enough pathos through the flashbacks and Ernie Hudson’s kind character to give the film a bit of substance but ultimately, it is a visual piece. Relentlessly dark without being grim, The Crow is an attractive and imaginative action spectacle.