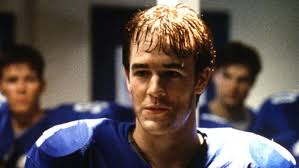 Varsity Blues had the opportunity to be a memorable black satire on the world of high school football in Texas, a comedic Friday Night Lights, and at first, I thought that was where it was going. The characters, led by Mox (Van der Beek), are interesting. The team plays under the ruthless, imperial Coach Kilmer (Voigt, prone to overacting when given the chance in bad films, here gives a note-perfect performance despite his over-the-top storyline), fighting for his 23rd district championship. Mox, a career backup QB who reads novels while riding the bench, is suddenly thrown into the spotlight once the star and team captain, Lance Harbor (Walker), blows out his knees. High school football is an intense life-altering period for many people. You could approach that seriously, demonstrated later by the movie and T.V Series, Friday Night Lights, or you could attempt to satirize how overly serious high school football can be. The latter approach is what could have made Varsity Blues a classic with the right direction. Dads pathetically arguing over who was better 20 years ago is great stuff. An attractive sex-ed teacher who works part-time as a stripper is not, and in the end Varisty Blues devolves into a basic sports film, i.e, the heroes win and at the last second. Football isn’t exciting cinematically. You need something else to make the action absorbing.