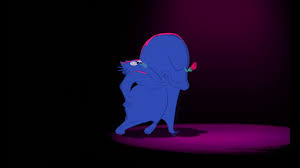 A pompous, over-fed cat gets his due once a shabby stray puts a hex on him, or rather, his large, luxurious tail which then comes alive to torment its owner. Perhaps inspired by Hans Christian Andersen’s “The Red Shoes,” the cat’s tail refuses to stop dancing, leading to some desperate acts and crazy situations, all in tune to its tango soundtrack. It’s an inspired piece of film-making, with incredible hand-drawn animation, aided by some computer wizardry. Beautifully expressionistic work recalling Disney’s masterpiece, Fantasia.