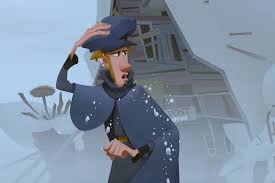 Young, rich, entitled Jesper (Schwartzman) is given an ultimatum: post 6,000 letters in a year or face being cut off from his inheritance. His family owns the postal business, so working as a mailman in a miserable, remote island of Smeerensburg is a real come down. Finding, on arrival, a town torn by family feuds, Jesper doesn’t see any chance of hitting that 6,000 letter-mark until meeting a mysterious toymaker named Klaus (Simmons) who gives Jesper an idea to turn things around. Fresh take on the Santa Claus myth, Klaus tells a good story and compliments it with unique, well-crafted animation. It may seem an odd complaint but it lacks what I would describe as the Christmas spirit for most of the film. For the majority of its run time, we see everything through Jesper’s jaded eyes and Christmas is seen as a commercial opportunity. It’s not until the very end that Klaus really brings it home.