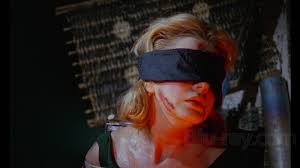 A killer in a blank mask. A damsel in distress. I’ve seen enough of these films to know that no one is coming to save her. She’ll die. Much of the director, Mario Bava’s, skill lies in how creatively and artfully he kills off his cast (primarily women from what I’ve seen). By the way, that wasn’t just one scene from Blood and Black Lace that I was describing. That’s about six or seven consecutive scenes. That’s the whole movie, and it would become so influential that it spawned dozens of like-minded pictures to the point that these films became their own sub-genre (specific to Italian cinema) known as Giallo films.

I’ve seen about a dozen now of varying quality and there are certain details that you find in most, if not all of them. Large cast of female characters. This one isn’t true of all Giallo films but it’s true of some of the best I’ve seen (Suspiria, What Have You Done to Solange, Phenomena). You find this a lot in American horror films as well and I don’t think it’s a matter of pure misogyny. I’ve always defended horror films on this matter. I think a woman (or a child) in peril is simply more terrifying than a grown man, and I don’t think I’m alone in feeling this way. The gratuitous nudity in American horror films is a different matter but I haven’t noticed any of that in the Giallo pictures I’ve seen, although the women characters are always gorgeous, regardless of the setting. Another common characteristic is the whodunnit, killer in a mask aspect of all these movies. It’s a gruesome shift from the friendly, witty whodunnit pictures of classic Hollywood that were entertaining but devoid of any malice or horror. Also, Giallo films all emphasize color. Lush, over-saturated color. Even the ones from the ’60s when most films were still using black and white. They all seem to have the same strengths and weaknesses too. Though they may differ in overall quality, all of these films eschew witty dialogue, character development, plot logic, and believable acting in favor of fluid camera movement, mise en scène, set pieces, lighting, and gore. Mario Bava and Dario Argento are masters of the latter crafts.

Blood and Black Lace features an ensemble cast of beautiful women and creepy looking men all working at a fashion house in…Italy, I suppose. The top-billed character, played by Eva Bartok, is named Countess Christina Como, but then the rest of the characters are Nicole, Peggy, and Greta so I don’t know. I’ll have to pay more attention to the location next time. In any case, one of the girls is killed, and everyone working there is a suspect. Everyone working there is in danger for that matter. You can’t have a slasher film (which Giallo films ushered in) and have only one victim. The majority of Blood and Black Lace is extended scenes of random female characters (all the characters feel random with the complete disregard for development) being killed off. If there’s a plot, it wasn’t understood by me, and the final act, rather than upping the ante, simmers down to a dull rather unsatisfying conclusion. The dialogue and acting are unsurprisingly asinine, and the previously mentioned, generously deemed ensemble acting is actually just an exercise in episodic horror that amounts to an awfully disjointed whole. What stands out and what’s positive about Blood and Black Lace is the visual elements. The killer’s mask, the elegant camera movement, the command of space. Bava is great and he’s done better than this film. What I appreciate most about Blood and Black Lace is the obvious influence it had on much better pictures. As an early example of the Giallo film, it seemed to spark something deeply appealing.