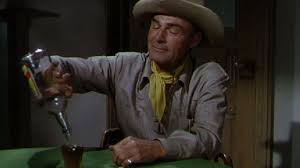 Owen Merrit (Scott) has been thrown over by Laurie (Leslie) for a wealthy land baron, Will Isham (Knox), but can’t quite give her up, believing that she still loves him. Isham, for all of his wealth and power, is a jealous, insecure man and he sees Merrit as a threat. Isham’s plot to destroy Merrit leads the latter to hiding out with a schoolmarm, Nan (Drew), and biding his time to get revenge.  Man in the Saddle hits all the familiar notes in unspectacular fashion but westerns, even at their most derivative, can be great fun. Man in the Saddle is not much fun, despite all of its technical competence, mainly because it’s too muddled early on and the characters aren’t distinct enough until too late in the film. By that time, I was pretty bored. The romance/ love triangle is also uninteresting.