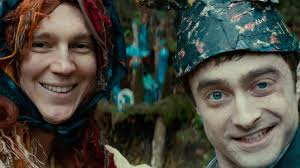 A man (Dano) stranded on an island finds a chance at escape when a dead body washes up on shore (Radcliffe). To his amazement, this dead body possesses all kinds of extraordinary abilities including flatulence that can act as jet propulsion, for example. It’s an extremely strange and quirky picture which naturally makes it an indie darling. I give it all the points in the world for originality, plus the two leads perform the hell out of it, but I was turned off from the jump, and found myself shaking my head in bemusement for much of the film’s remainder.