I don’t get sentimental about much. Movies are the exception and Christmas movies especially. I am very forgiving of Christmas films; very slow to judge harshly. The truth is that there are only a handful of great Christmas films. Most are mediocre but appeal to me on either nostalgia or a lightness that I enjoy come November and December. I feel like I’ve already seen every great Christmas movie and I’m not overly optimistic about any new releases coming our way this year. Last Christmas, for example, just released in America to middling reviews. I had hopes that it would be a charming Christmas rom-com but it seems to be another addition to that long list of simply passable holiday fare. What’s left for this upcoming season? Little Women has its Christmas moments and I’m definitely looking forward to it but I don’t know that I’d characterize it as a Christmas film. Then there’s Black Christmas. It looks entertaining, to be honest, but that’s not what Christmas is about. I have to hope that I’ll be surprised by something new this year. 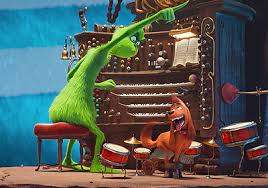 Dr. Seuss’ wonderful stories have yet to translate to cinematic gold. There’ve been commercial hits, this version of The Grinch included, but none of them are great and I do think the potential is there for something exceptional. Nineteen years after Jim Carrey’s bizarre but interesting take on the green misanthrope, Benedict Cumberbatch takes over in a much sweeter, animated version. You likely know the story but in case you don’t, it features a hairy green creature, known as the Grinch, who lives life as an outcast in the jolly land of Whoville.  Christmas is the town’s favorite time of year but the Grinch hates Christmas and decides to do something about it. He pretends to be Santa Claus in order to steal everyone’s gifts and sabotage the holiday. The Jim Carrey led Grinch was pretty obnoxious and the Whos were materialistic and unlikable, although I think Carrey was a force of nature in the role. This Grinch is much more likable. It’s a pleasing, beautifully animated picture but suffers from a lack of real menace out of its title character. That’s disappointing. As a result, it’s not funny enough, his transformation not astounding enough, and this rendition of The Grinch ends up being pretty forgettable.