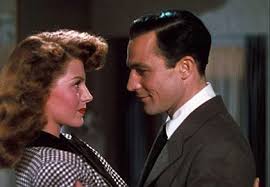 Chorus girl, Rusty Parker (Hayworth), has a decent job and a boyfriend, Danny McGuire (Kelly), she loves dearly but can’t help but aspire for more. An opportunity to pose for Vanity magazine comes her way and she makes the most of it, but her newfound success puts a strain on her relationship with Danny. Like most if not all of the old, classic Hollywood musicals, this is a well-crafted, staged, and performed picture. The technicolor cinematography is bright and appealing and there are a number of inspired musical numbers. The story, on the other hand, is less inspired. Most romantic musicals are hackneyed to some degree but there’s not enough happening in Cover Girl that’s compelling. Danny and Rusty already love each other at the start of the film so they’re kind of boring as the story moves on.