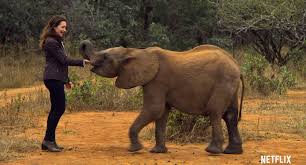 This lowkey romantic drama stars Kristin Davis as Kate Conrad, devoted mother, and socialite wife to a successful businessman, Drew, who asks for a divorce not long after their son departs for college. Left reeling, Kate travels to Zambia where she meets the handsome Derek (Lowe), a local pilot, and the two fall for each other over the course of her extended holiday as she, a former veterinarian, connects with the wildlife, specifically an elephant she helps rescue. I would say the film is way more passionate about animals and wildlife than it is about Christmas. That’s not a criticism. It’s simply that Holiday in the Wild didn’t make much of an impression on me as a Christmas film. It’s a perfectly pleasant but unspectacular hour-an-a-half. About what you would expect. I did like how low maintenance it was, eschewing the trumped-up drama of most films of its ilk.