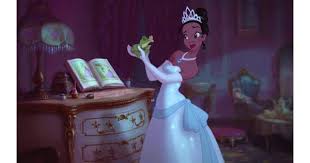 Traditional animation is a thing of the past for Walt Disney Animation Studios. The lovely, hand-drawn, two-dimensional work that made Disney famous (Snow White, Pinocchio, Bambi, Cinderella) has given way to three-dimensional computer animation, first achieved by Pixar (Toy Story), now taken up by just about every American animation studio including Disney itself. Ten years ago, around Christmas, saw the last time Disney released a big-budget 2-D animated flick, The Princess and the Frog, with the more modest release of Winnie the Pooh following 2 years later. Neither film proved a hit financially, though both were critically acclaimed. In the meantime, the computer-animated Disney films Tangled (2010), Wreck-it-Ralph (2012), Frozen (2013), etc., each made at least $450 million worldwide, with Frozen going over a billion on its way to becoming the second-highest-grossing animated film of all-time (not adjusted for inflation). Does this demonstrate that people aren’t drawn to 2-D animation anymore? Has 2-D animation become like black-and-white photography? I don’t think so, though it’s hard to prove. I know it’s different cultures and demographics, but anime is more popular than ever. Your Name made over $350 million worldwide just 3 years ago. And I’ve never heard a kid complain about the animation of Snow White or Pinocchio or The Lion King the way most kids will complain if you try to get them to watch black-and-white classics. So traditional animation doesn’t appear to be “antiquated” in the same way as black-and-white filming.  It’s difficult to put my finger on just what did hold The Princess and the Frog back from becoming the global hit most other Disney princess movies are and I suspect the easy answers aren’t any good. For one thing, traditional animation was floundering for years before The Princess and the Frog. Atlantis, Treasure Planet, Brother Bear, and Home on the Range had varying levels of success but I think it’s safe to say that each of them was disappointing in some way (either commercially or critically). Maybe it’s a case of guilt by association. The Princess and the Frog looks like those movies. Tangled is a huge success. Let’s stop making movies that look like the former and emulate the latter. Whatever the case, it’s a shame that The Princess and the Frog isn’t more appreciated or even seen, because it’s quite a film. It’s not on the level of Disney’s very best but I’d place it on that very next tier which is still pretty special.

The film begins with a quick glimpse at the modest but happy childhood of heroine, Tatiana (voiced by Rose), and then we flash forward many years to see her as a hard-working adult in 1920’s New Orleans trying to save up enough money to own a restaurant. Tatiana is black, making her the first black Disney princess (the only one to date), so from the very first minute, before we know if the film is any good, we know it’s important, and we hope that it’s good and worthy. I say Tatiana is a good role model for anyone watching. She doesn’t have time for much fun, as she sings in the film’s best song “Almost There,” but she’s not a shrew either. Then there is Prince Naveen (voiced by Campos), a cad, recently cut off from his parent’s money. He arrives in New Orleans with two choices: get a job or marry someone rich. His rogue heart is set on marrying someone rich. It’s noteworthy to me, and it’s one of my few quibbles with the movie, that Naveen is ethnically ambiguous, which is fine, but I really would have preferred a black prince. There’s some good to be found in portraying love between a mixed couple, certainly, but there are so few positive depictions of black males in the media in general that I believe an opportunity was missed. Anyways, Naveen gets mixed up with a local voodoo practitioner named Dr. Facilier (voiced by Keith David and it’s a great voice as anyone who’s seen Gargoyles will remember) and ends up a frog. If he doesn’t kiss a princess by a specific time, he’ll remain a frog for the rest of his life. Finding Tatiana at a costume party and mistaking her for a princess thanks to her costume, he convinces her to kiss him, but she winds up a frog as well. The two travel across the bayou looking for Madame Odie (voiced by Lewis), who might be there only chance at changing back.

As the first attempt by Disney to feature black characters in the lead, The Princess and the Frog is open to intense scrutiny. Maybe it suffered a bit from that, but most of what I’ve heard in the form of criticism is nonsense. I recall Paul Mooney complaining that Tatiana spends most of the film’s runtime as a frog. I say who cares, though that’s not much of a counter-argument. Also, there were questions about the Disney princess formula running out of steam. Perhaps The Princess and the Frog is too traditional. It’s classic formula through and through: princess, prince, music, villain, colorful side characters, animals. I love the formula and don’t think the formula will ever truly die. Tangled came out a year later and resurrected it while Frozen put to rest the idea of stopping Disney princess films for good. I don’t know why but The Princess and the Frog failed to surprise people and somehow Tangled and Frozen gave the impression of something completely new, despite all following that same formula. I happen to think The Princess and the Frog is better than Frozen while Tangled is the best of the three. The Princess and the Frog is one of the most beautifully animated films Disney’s ever produced. It has a cast full of great characters including a standout villain, great music by Randy Newman, and a fun story to get you from the opening credits to happily-ever-after. I suppose it will just have to settle for being underrated.