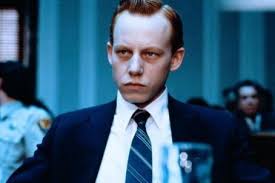 Cops are generally useless in movies like this one. If you have a thriller and the main character isn’t a cop, then most likely the cops are going to be completely unhelpful in the film. They’ll probably accuse the protagonist of something he didn’t do or arrive at the scene too late or get killed by the bad guy despite years of training while the film’s hero (an average male) is able to defeat that same bad guy. The Bedroom Window takes this cliché to an infuriating extent.

Terry Lambert (Guttenberg) leaves an office party early one night to begin an affair with his boss’ wife, Sylvia (Huppert). As their night winds down, Terry steps out of the room for a minute and Sylvia gazes out the window. At that moment, she witnesses the assault and attempted murder of a young woman, Denise (McGovern), by a pale, red-headed figure who then runs off. Not wanting to speak with police and risk having to testify in court where her husband would find out about the affair, Sylvia parts and resolutely decides not to speak of what she witnessed, content enough that the woman she saw was spared. Days later though, another woman is raped and murdered in similar circumstances to the attempt she witnessed. Terry, feeling a sense of civic responsibility, goes to the police and pretends that he witnessed the crime, feeding them information that Sylvia (who agrees with the plan) gives him. Lying to the police is not a great idea, but the way Terry’s life spirals out of control, as a result, is extreme and a little hard to believe. The first problem comes when Terry’s asked to look at a police lineup and pick out the assailant, where he meets Denise. The film, interestingly, loses its way later on, just when it starts to resemble other thrillers we’ve seen before, specifically the classic Hitchcock pictures. Hitchcock loved thrusting ordinary men into extraordinary situations, and the way Terry goes from key witness to lead suspect is very reminiscent of a famous scene in North by Northwest. It’s not that I have an issue with wearing the Hitchcock influence so conspicuously. A number of excellent films have done that: Charade, Blow-Out, Ghost Writer. And Hitchcock, also, wasn’t always interested in perfectly logical plotlines. My problem is that in The Bedroom Window, the rewards don’t always outweigh the frustration caused by maddening character decisions. Doing my best not to spoil anything, there’s one moment where Terry is left holding a freshly stabbed body and flees as the cops approach despite not having any weapon on him. If he had just waited, couldn’t he have just told the police, “how could I have stabbed this person if I don’t have a weapon?” As I said, logic is not paramount.

Aside from the frustration I felt watching the incompetent police in The Bedroom Window, and the silliness of some of its contrivances, the film is a perfectly serviceable thriller. It’s very good at times and its trio of leads (Steve Guttenberg, Isabelle Hupert, Elizabeth McGovern) as odd as it seems on paper, is the one atypical touch of an otherwise familiar thriller.