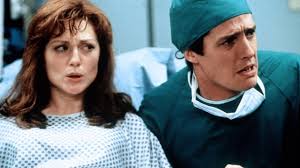 Surprise! Hugh Grant and Julianne Moore are going to have a baby. The problem is Grant’s not sure he wants to be a father or even a husband for that matter. Written and directed by Chris Columbus, who worked a number of times with the great John Hughes, seems to strive for the latter’s ability to take mundane, middle-class situations and mine them for comedy. The zaniness, slightly over-the-top acting, annoying side characters, and eventual sentimentality are all hallmarks of Hughes’ work, so the ideas behind this romantic comedy could have worked. They just don’t. The jokes largely fall flat. The performances are overdone even for a comedy, and the annoying side characters are just annoying. Julianne Moore does a lovely job as the stoic centerpiece, but the film loses believability with its remaining cast, as talented as the actors are, and I would have greatly appreciated more Goldblum.