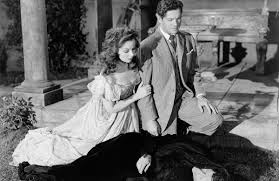 Ambitious publisher and privileged young man, Lewis Venable (Cummings), sees the opportunity of a lifetime when he hears about a series of love letters written by famed 19th-century poet Jeffrey Ashton. A professional tip (actually something a little shadier) leads him to an old mansion in Venice owned by the still living Juliana Bordereau (Moorehead), now over one-hundred years-old, who was Ashton’s lover during his time and the recipient of his letters. Venable assumes a fake identity in order to swindle Bordereau out of those letters but finds the house a dark place that holds more secrets than just the letters. There’s the beautiful Tina, Bordereau’s cold but alluring niece, for instance. In the vein of many old gothic chillers, The Lost Moment boasts lovely black and white photography to go with its memorable set pieces. Susan Hayward’s Tina is a fantastic and baffling femme fatale and Agnes Moorehead under heavy makeup is convincing as the ancient hag. I was left disappointed, however, in the main character who shifts too quickly from scoundrel to hero. Rather than go for something truly original and outrageous, the film plays it safe and ends on a pleasant note.