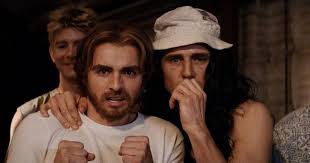 Tommy Wiseau’s 2003 film, The Room, is among the worst movies ever made. As someone who seeks out horrible films routinely, I can affirm that The Room is in a class of its own. What James Franco understands, and it’s the reason his film about the making of that film works so well, is that making a complete disaster is just as special as making a masterpiece. If you and a group of people set out to make a terrible movie, it wouldn’t reach the lows of Wiseau’s film, which he made in earnest. Franco and his cast of friends and stars do loving, admirable work in bringing to life the story behind the cult classic. Dave Franco plays Greg Sestero, a handsome, all-American, talentless aspiring actor who meets the much older, mysteriously wealthy, and eastern European Wiseau. The two move to Hollywood, and after a string of frustrations, they decide to make their own film. This material is abundant in comedic potential, and James Franco capitalizes on it. This is a very funny film. More impressively, they capture the frustration, rejection, and broken dreams that go along with acting, or any artistic endeavor. In a performance that deserves the praise and award consideration it garnered, James Franco makes Tommy Wiseau into the American hero he always wanted to be, by making him relatable.