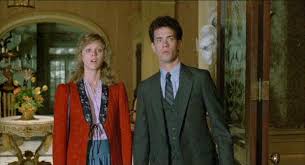 Walter and Anna (Hanks and Long) are ready for the next step, so they invest in a house they think comes at a real bargain. They soon find out that they’ve been rooked, and set about the nearly impossible task of putting their shambles of a house back together. Some of the slapstick, stunt work, and set pieces are impressive, but the film’s almost completely dependent on them. Tom Hanks, in this, his goofy comedies period, never gives less than a fully committed performance, no matter how unworthy the material. He and Shelley Long make a nice pair, but the situation that they’re put in here is only slightly amusing, and not enough to sustain an hour and a half viewing.