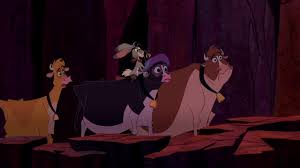 Caught between the awesome spectacles that Disney Animation produced in the ’90s and the free-spirited energy of classic Warner Bros. animation, Home on the Range is so slight and inconsequential that it’s largely been forgotten among Disney Animation’s official canon. Roseanne Barr voices Maggie, a prize cow making a new home on a farm called Patch of Heaven, but after finding out that the farm’s owner owes too much money to keep the place, she and two other cows turn bounty hunter in order to pay off the debts. There are a number of positives: the voice acting, the distinct characters, the music even is pretty good. However, ultimately there isn’t much to this picture, and it’s best simply for passing time.