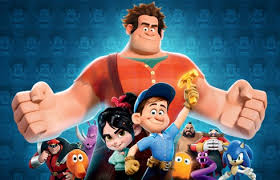 Ralph (Reilly) is the villain of a classic arcade video game called Fix-it Felix Jr., but every once in awhile, he’d like to be the hero. “Just because he’s the bad guy, doesn’t mean he’s a bad guy.” At night, when the game ends, and all the characters go home, he’d like to be treated as part of the gang. Seeing that that’s never going to happen, he sees an opportunity to be a hero by sneaking into other games at the arcade, and eventually he ends up in Sugar Rush, a racing game where he meets Vanellope von Schweetz (Silverman), King Candy (Tudyk), and a host of other characters on his quest to win a medal and return to his game a hero. Top shelf animation, vibrant visuals, and a premise abundant with possibilities. It’s a terrific adventure film and a prime example of Disney’s second Renaissance.