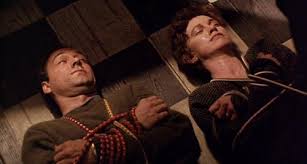 A skilled and ruthless burglar named Gus (Leary) gets trapped in small-town Connecticut suburbia after a botched robbery. With the police securing the town’s exits, Gus is forced to hide out while he comes up with his next move, choosing at random the home of Lloyd and Caroline Chasseur (played by Spacey and Davis). Unfortunately for him, the old married couple is deeply dysfunctional, and their marriage problems spill out even as he holds them hostage. Though slightly stagey and contrived, the film does a nice job of sustaining its premise through its runtime, and the performances from the three leads are excellent. These are great roles for Davis and Spacey, and they make the most of them. The idea of suburban life not being all it’s cracked up to be is probably a film cliché at this point, but The Ref represents one of the better entries with that material. Better than the more lauded American Beauty in fact.