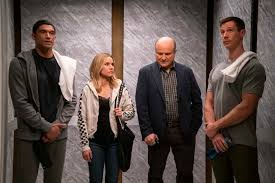 Veronica is back, 12 years removed from her last appearance on television and 5 years removed from her big-screen come back. Originally starring on the CW, Hulu takes over this season and seems to be a great landing spot. There’s no rust. Season 4 kicks off fast and speeds through to an overall satisfying end. Veronica (Bell) and her dad, Kieth (Colantoni), get wrapped up in a local mystery as someone is killing off the spring-break crowd. Seeing as their city, Neptune, California depends on the spring-break crowd for business, a bit of a Jaws situation occurs where the authorities don’t want to take the proper precautions out of fear for local commerce. It’s an involving case and all of the new characters are welcome additions. Perhaps taking a page out of the phenomenal series, Fargo’s book, Veronica Mars season 4 is a sprawling saga with a lot of interesting characters and strange moments. J.K Simmons, Patton Oswalt, Kirby Howell-Baptiste, Izabela Vidovic, and Clifton Collins Jr make strong impressions. Unfortunately, much of the original cast is short-changed. Wallace is barely a part of this season, Mac doesn’t show up at all. Worse for me than that is my memory of Veronica not matching what she’s like in this season. She’s often the least likable character. That turns out not to hurt the show too much. It’s only the very end and I mean the last few scenes that had me scratching my head and apparently many fans up in arms.