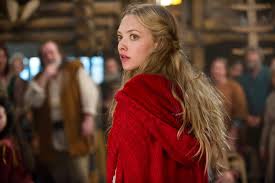 I love a good whodunnit, but this one is directed by Catherine Hardwicke whose previous film was Twilight. That’s not to say anything about her competence as director, but there’s a definite audience I feel Red Riding Hood is hoping to attract that squanders its good elements. Amanda Seyfried is Valerie, the Red Riding Hood of the story, living in a small, remote village and her sister has just been murdered by the legendary Wolf. Father Solomon (Oldman) arrives into town with his group of mercenaries to investigate, informing the village that the wolf is, in fact, a werewolf and someone among their set. It could be anyone, of course. It’s a classic mystery setup but a good one when executed well. Red Riding Hood is entertaining. Seyfried and Oldman are interesting characters. Ultimately though, there were two or three overwrought scenes of teen romance that bog the picture down and the Wolf’s appearance is a disappointment.