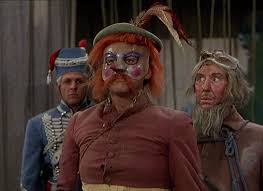 Rafael Sabatini’s fantastic adventure novel is adapted and condensed into this colorful, lively film starring Stewart Granger as Andre Moreau. Moreau is a fun, gregarious type living as an actor in France right before the revolution. Apathetic to his best friend,  Philippe’s political causes, Moreau’s attitude changes once Philippe is killed by the Marquis de Maynes (Ferrer). Heart set on vengeance, Andre bides his time training under swordmaster, Doutreval, and hides from the authorities seeking to imprison him by assuming the disguise of Scaramouche, a stock clown character in early European theater. Beautiful Janet Leigh and Eleanor Parker play love interests for Andre, his love life proving as complicated as the political plot. Actually, most of the politics from Sabatini’s novel seemed to be scrubbed out of this movie. It’s probably for the best. Scaramouche’s 2-hour runtime is already filled to the brim with plot and intrigue. Still, a little more historical context might have made the picture more substantial. Instead, you’ll have to use what you remember from history class to piece together some of the setting and background. Scaramouche’s focus is on fancy swordplay and sparkling romance, assuming correctly that these are what we care about most. Stewart Granger doesn’t quite possess the lightness of other great stars of swashbucklers like Erroll Flynn or Ronald Coleman in Prisoner of Zenda. His supporting cast is excellent, however.