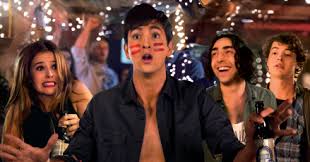 Four-in their mind-repressed high schoolers vow to have more fun in the summer break before they head off to their respective universities. For one member, that means sleeping with the rich married women who pay him for tennis lessons. For another, drugs. The only girl member just wants to have a serious boyfriend, and the final guy talks about wanting “release.” It’s a crude, vulgar teen comedy that stumbles through American Pie/Superbad territory. It does offer engaging performances despite the familiar, mostly lame material.