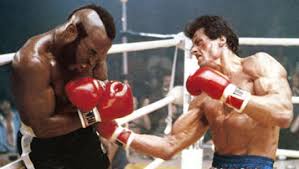 Rocky III is a smorgasbord of pop culture icons, offering Mr. T, Hulk Hogan, Kermit the Frog, Survivor’s “Eye of the Tiger,” and Apollo Creed to go along with Sylvester Stallone’s defining character. In this, Rocky Balboa’s third outing, he, reigning heavyweight champion of the world, takes on the cocky, fearsome Clubber Lang (played unforgettably by Mr. T). The results may be unsurprising but the craft is in making us care. This is my favorite Rocky movie. He is an indelible character and, when paired with a strong villain, as he is here (each of the first four Rocky’s had proper antagonists), the formula is undefeated. Never mind the lack of subtlety or defensive boxing.