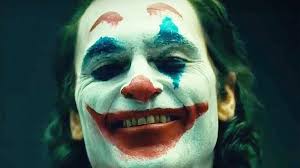 The world can seem pretty dark when you’re depressed. No film off the top of my head paints a more vivid picture of this than DC’s newest flick, Joker, directed by Todd Phillips, perhaps a surprising choice after a couple decades worth of comedies (The Hangover trilogy, Old School, Starsky and Hutch), and starring Joaquin Phoenix, following in the footsteps of a couple iconic film Jokers (Jack Nicholson and Heath Ledger) and one lousy one (Jared Leto). This Joker is a film in close-up. Even when the camera pulls back, the focus remains, the cast, the plot, the tone all revolve around its titular “hero,” here named Arthur Fleck. It’s his world. That may seem like an odd thing to say about a character struggling as profoundly as Fleck is over the course of this movie, but we see Gotham as he sees it. He’s an unreliable narrator. The extent of how much of what we’re seeing is influenced by Fleck’s mental state is, I believe, debatable, but, in any case, the Gotham we see is a hellish landscape populated by powerful bullies and hostile bottom-feeders. Fleck just wants to bring laughter into the world.

The movie kicks off: 1981, Gotham City. Living with his mother and struggling through a dead-end job as some sort of clown-for-hire, Fleck kills a group of yuppie jerks on the subway one evening. It’s a downward spiral from there with fate offering one blow after another to make Fleck break down. The list of his life struggles throughout the film would seem over-the-top, maybe melodramatic if the tone wasn’t so consistently grim. He loses his job, has the funding for his medical treatment cut, gets beat up a couple of times, etc. The most interesting part of Joker is its take on Gotham. It’s a city cut-off from the rest of the world. I don’t recall any mention of life beyond its city limits. Where did everyone else go? It’s like the setting of This is the End, where most people have gone off and those left are expected to rot. It’s also a world without superheroes. There’s no Batman, no Superman, nor anyone else from DC’s roster of supers. There don’t seem to be any blue-collar heroes either or average men looking out for their peers. Thomas Wayne, usually portrayed as a champion of lost causes, is played here by Brett Cullen as another big-money politician. Fleck idolizes late-night host Murray Franklin (De Niro) but that plays out in predictable yet satisfying fashion. Ultimately, Fleck’s gradually building Joker persona makes sense (perhaps this is what some object to) and he becomes a wake-up call to a large portion of Gotham’s citizens (reminding me of the “I’m mad as hell and I’m not going to take it anymore scene in Network).

Films like these, where the protagonist descends into madness are rarely made and difficult to watch. If done right, they can be fascinating but can hardly be considered fun experiences. I would argue that Joker is done right (Phoenix is mesmerizing in the role), though it’s not easy to remember a mainstream movie this polarizing in recent years. Is it irresponsible? Is it validating angry loners? I don’t buy those indictments in general. I don’t believe films are responsible for social ills the way that some do, so I feel no need to defend Joker on that level. It’s a good film, not a great film. It has too many endings for one thing (I prefer a strong abrupt finish to letting a film like this peter out with several long sequences). It’s also too reminiscent of Scorsese’s classics Taxi Driver and The King of Comedy without deriving any value from those influences. Some argue that it’s a breakthrough comic book film. I don’t give it that much credit. Did it change the rules of comic book adaptations or surprise us with the direction it went in? No. Spiderman 2, The Dark Night Trilogy, Unbreakable. Those were the game-changers.  Joker’s simply slightly better than your average.