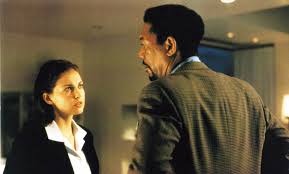 Mysteries go down pretty easy and don’t have to work very hard to be interesting. If a film lets you know that there’s a killer and you don’t know who it is, most people will want to find out. Kiss the Girls gives us a killer wearing a mask; the simplest means of setting up a whodunnit. The killer, Casanova (self-named), abducts beautiful, intelligent women for his collection, then sadistically has his way with them hidden away in his underground lair. One of the girls abducted, Naomi, is the niece of brilliant D.C detective Alex Cross, played by Morgan Freeman, who joins in on the manhunt after a promise made to his sister. Ashley Judd is another of Casanova’s intended victims, only she escapes and helps Cross catch the bad guy. Most films of this sort are pretty shallow and formulaic. Kiss the Girls does nothing to break that mold, but it is competently made and benefits from outstanding leads in Freeman and Judd.