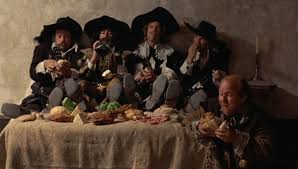 All for one, and one for all. You’re familiar with this mantra, no doubt, whether you’ve read Alexandre Dumas’ classic 19th-century novel, The Three Musketeers, or not. You’ve heard it an endless amount of times, referenced in other works, or perhaps you’ve seen any number of films based on or influenced by said novel. Apparently, there are close to fifty film adaptations, and though I’ve only seen five, I’m willing to claim this, Richard Lester’s 1973 version, is the best of them. It would be tough to beat and it’s certainly the best of the ones I’ve seen, though the George Sidney-directed, Gene Kelly-led old Hollywood version is fantastic fun.

The Three Musketeers, like many 19th-century novels, is fairly long (around 700 pages ), and so, any film adaptation is going to have to make do with a fraction of the plot and story development of its source material. It’s for this reason that I would welcome a mini-series adaptation (apologies if it exists already, I’ve never seen it). Director, Richard Lester, best known to this day for directing the spirited Beatles’ flick, A Hard Day’s Night, teamed up with writer, George MacDonald Fraser, best known for his series of Flashman books, and together- I’m not sure whose decision it was, but it proves wise-their Three Musketeers basically cuts away all of Dumas’ subplots. Here, beginning like the novel and all adaptations, young, provincial Frenchman, D’artagnan (York), is ready to leave the nest and, after his farewells with his parents, travels to bustling Paris where he hopes to make it as a member of the King’s guard, a musketeer. Upon arrival, his unrefined country ways rub several people the wrong way and he, confident young man that he is, accepts three duels on his first day, each with a musketeer; one with the stoic Athos (Reed), another with the extravagant Porthos (Finlay), and a final one with the devout Aramis (Chamberlain). Before he gets a chance to fight any of the three, however, an encounter with henchmen working for the devious Cardinal Richelieu (Heston) sees him teaming up with them instead. Later on and now friends, D’Artagnan, Athos, Porthos, and Aramis attempt to thwart one of the Cardinal’s plots by sneaking into England and recovering jewels given by Queen Anne of Austria (Chaplin) to her lover, the Duke of Buckingham (Ward). Faye Dunaway and Raquel Welch play love interests with Dunaway as a femme fatale of sorts, Milady de Winter, and Welch as a spotty but beautiful dressmaker, Constance.

There’s a sequel released just one year later (1974) that I haven’t seen and I can only assume covers more of Dumas’ epic saga. If so, I like that approach. The Three Musketeers warrants two films. At the same time, the clandestine mission to recover the Queen’s jewels has always been my favorite chapter in Dumas’ serial and makes for a fine standalone film and what a spectacular film Lester’s made. It’s marvelous to look at and a witty, almost irreverent take on the swashbuckler tale. Each frame is elaborately designed and each scene offers some surprising, humorous visual detail. I love the swashbuckling adventure stories of old. They’re close to extinct nowadays and that’s a shame because films like Captain Blood, Adventures of Robin Hood, The Mark of Zorro, or this one are fun, attractive, romantic, and exciting, while a great deal of modern action flicks are flat and boring. The one criticism I have of this Three Musketeers is that it’s less concerned with the characters’ and their development than other iterations and the three musketeers, in particular, are short-changed a bit. Only Oliver Reed as Athos makes any real impression thanks to his charisma and physical presence. I’m going to give the filmmakers the benefit of the doubt though and imagine that the characters will develop more in the second part. To be continued…