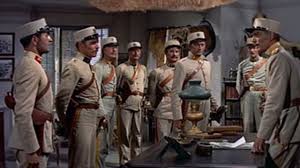 Mid-1800s, India. Captain Alan King (Power) serves in the British army and, unknown to his peers, was born to a white father and a Muslim mother. Leading his troops against a local uprising, he learns that the leader of the rebels is Karram Khan (Rolfe), a man he grew up with as close as brothers. There’s also some drama surrounding his romance with the general’s daughter, Susan (Moore). The film is consummately crafted from a technical standpoint but lifeless when it comes to the human element. The lead characters are mainly British soldiers and so the old cliché, the stoic, stiff-upper-lip sentiment abounds. That would be fine if the film had worked in Khan earlier. It’s not until he arrives, near the end, that King of the Khyber Rifles gets interesting. There are a couple of late, suspenseful scenes involving King and Khan that make the film worthwhile. King plots to kill his old friend. Khan’s more cunning than he lets on. I would have extended this portion of the plot; made it the center of the movie.