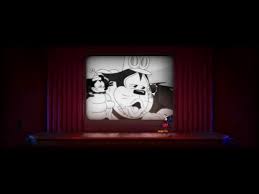 Attempting to update a classic Mickey Mouse cartoon for modern times, this short starts off with Mickey in a quintessential premise. The big bully, Pete, is after Mickey’s girl, Minnie, and it’s up to Disney’s greatest creation to save her. Complicating matters, and putting a new spin on the material, is the breaking of the fourth wall, almost literally. Mickey breaks through the theater screen and becomes a three-dimensional figure. The short then sees Mickey using the fourth wall and his bag of tricks to stop Pete. Much of the short is clearly designed to show off the then-booming trend of 3-D. Thankfully, the film avoids being outright gimmicky. It’s a solid piece of animation, though Mickey looks a whole lot better in 2-D.