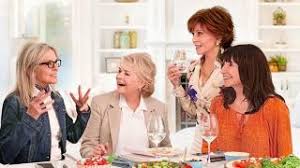 Four women-widowed Diane (Keaton), promiscuous Vivian (Fonda), married Carol (Steenburgen), and successful, but lonely Sharon (Bergen)-  contemplate love, romance, and aging as they read 50 Shades of Grey for their monthly book club. At the same time, some dramatic changes affect their lives. Diane moves to Arizona to be closer to her kids and meets a suave pilot (Garcia). Vivian reunites with the man who got away (Johnson). Carol attempts to spice up her marriage, to no avail, and Sharon tries online dating, reluctantly. I doubt that I’m what you’d call the target audience for this, but I’ve seen my share of chick-flicks. This is an alright one. Not too dull, nor exceptionally witty, it probably checks all the boxes for its focus group. I found Bergen’s character the funniest and most appealing.