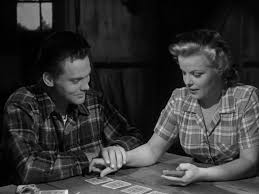 Foreign-born, middle-aged Marko (Haas, director and star) has spent most of his adult life mining for gold. Well, more accurately, he’s spent most of his adult life looking for a gold mine he found when he was young, then lost almost immediately due to some extremely bad luck. At the start of this film, it’s been twenty years since Marko first found that mine, but he hasn’t given up. The rest of the town thinks he’s crazy, except for amiable Ray Brighton (Agar) who joins in the search and puts in with expenses. When the two men finally hit pay dirt and rediscover the gold, Marko decides he doesn’t want to share. His plan is simple but seems like a long-shot. He marries a woman in town, Peggy (Moore), with a bad reputation in order to dangle her in front of his unwanted partner. Hoping to catch the two in flagrante so that he can kill them both and get off on “the unwritten rule” of old-school law, Marko plots and prods over the course of a long winter with the three characters snowed into their lodge. Bait spells out its premise through Marko’s narration, which is unnecessary, in my opinion. I would have preferred to figure out Marko’s devious plot myself. I also didn’t see much point to the bizarre opening calling on “the devil” to introduce the story, as amusing as it was. Otherwise, the film, in only 79 minutes of running time, is very effective and efficient storytelling; an engaging noir.