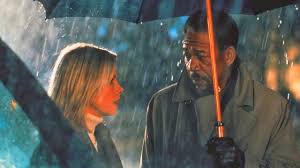 Any police procedural starring Morgan Freeman invites comparison with Seven (1995). Along Came a Spider doesn’t pack nearly the punch of that classic film, nor does it really hold together logically under close examination. However, I could watch Freeman investigate anything and Along Came a Spider offers a reasonably interesting premise. Freeman plays Alex Cross, a character that has spawned a couple dozen mystery novels and three films, this being the second after Kiss the Girls (1997), adapting the series’ first novel. Cross gets dragged into an elaborate kidnapping plot involving a Senator’s daughter led by criminal mastermind (in the books anyways), Gary Soneji (Michael Wincott is creepily effective as the kidnapper) and Monica Potter plays a disgraced Secret Service agent whom Cross takes on as a partner. By-the-numbers, as most police procedurals are, the film entertains and moves quickly; quick enough for us to overlook the shady logic in how Cross discovers certain things.