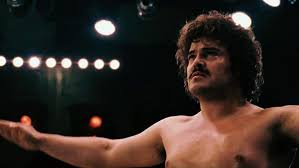 How amusing do you find the thought of Jack Black doing a Mexican accent? Or Jack Black playing a luchador? Your enjoyment of Nacho Libre starring Black as Ignacio, a cook at a quiet monastery who dreams of making it big as a wrestler, will likely depend on your answers to those two questions. Nacho Libre is a kind of a one-joke film. It milks all of the humor it can from its premise and does little beyond it. Rather than that being a complaint, I actually consider the film a triumph in style. Director, Jared Hess, who was coming off of Napoleon Dynamite at the time, has a very distinct visual approach and I’m a fan. On top of the idiosyncratic humor, the story ultimately manages to be fairly involving as well.