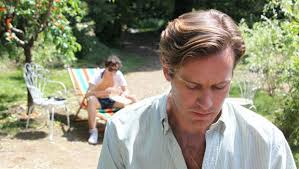 Set in the early ’80s, seventeen-year-old Elio (Chalomet) spends the summer with his parents in the Italian countryside, where he meets Oliver (Hammer), a college student his father’s invited to stay with them. While the reserved Elio is initially antagonistic towards the outgoing guest, the two slowly fall for each other in what becomes a summer of bliss and heartbreak. Written by James Ivory (Remains of the Day, Howard’s End), the film is a passionate love story whose greatest strength is in capturing and drawing out the lead character, Elio, in a terrific performance from Chalomet. Their relationship is awkward at times which is appropriate for a film about first love. However, I don’t quite understand many people’s view of Call Me By Your Name as romantic. It’s a grown man (maybe 30 years old) and a teenaged boy. That’s not romantic. That’s creepy.