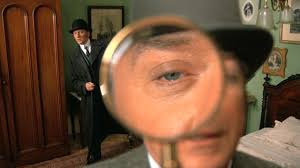 What if instead of the eminent Sherlock Holmes, it was the humble Dr. John Watson who was the genius? Without a Clue takes this intriguing idea and becomes a moderately successful film. Michael Caine plays Holmes, or rather Reginald Kincaid, a third-rate actor hired by John Watson (Ben Kingsley) so that the Doctor can hide behind his creation in order to solve crimes in the shadows. The big case, some counterfeiting scheme, isn’t as fun as the premise or the two stars; Kingsley as the straight man and Caine as the buffoon.