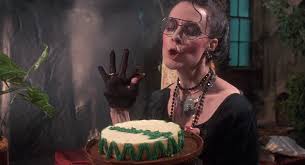 Unlike The Room, its closest rival, Troll 2 has a plot. The Room is a ponderous travesty. It’s profoundly terrible. You know how after watching a great movie, you can’t stop thinking about it? The Room is so bad, I couldn’t stop thinking about it. Troll 2, on the other hand, has all the ingredients of a normal film- plot, structure, villains, a climax, a protagonist- but they’re all handled so poorly, the people involved are so talentless, that Troll 2 becomes special in its own way.

Directed by Italian filmmaker, Claudio Fragasso, the man behind Monster Dog with Alice Cooper, who supposedly had a very limited grasp of English, Troll 2 isn’t even a real sequel. Hoping to drift off of “the success” of 1986’s Troll (a film which itself sits at 26% on Rotten Tomatoes), producers decided to call this film about goblins, Troll 2, starring Michael Stephenson as a boy, named Joshua, dragged to the sinister town of Nilbog (Goblin spelled backwards). His parents don’t notice all the odd things going on in this town, nor does his sister, Holly. The only aid Joshua gets is from his dead grandfather, who comes back sporadically (never explained why he can’t just stay and help). Here are my three favorite scenes:

2. Oh My God!-I’m not even going to try and explain this scene. It was already horrible, but Darren Ewing’s line reading is notorious. His underacting versus the other two actors just chewing up the scenery is a wonder to behold.

Troll 2 is extremely funny and amassed a sizable cult following. The film’s star produced a successful documentary titled Best Worst Movie, dedicated to Troll 2. There are many movies made, designed to be inane like Sharknado or Piranha 3D, but they can’t compare, for me, to Troll 2 in which every actor and filmmaker gives their all, and it still sucks. Just like certain intangible things have to come together for a movie to be great, I think it takes a kind of magic for everything to go this wrong. Best worst movie, indeed.