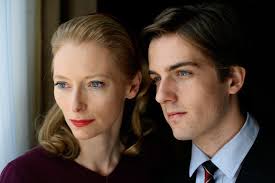 As the affluent Recchi family prepares for a changing of the guard, wife and mother, Emma (Swinton) begins an affair with her son’s friend, Antonio. Heavily melodramatic. Spare to the point of emptiness. I was not impressed with this film despite its sumptuous visuals and spirited score. The constantly wandering camera movement, while appealing, really serves no purpose upon further review, much like the film itself. Lovely but empty.